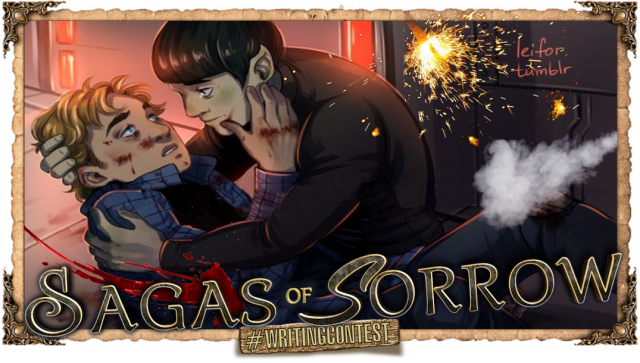 Another Stonewall Gaming #WritingContest is upon us and we're excited to announce the theme of our 2022 writing contest: "Sagas of Sorrow!"  Running now through July 31st, 2022, we're inviting all members of SGN to submit a story of their in-game character from their favorite game, whether it be Star Trek Online or any other, but we want you to incorporate one of the following tragedy themed writing prompts in your submission:

Writing prompt choice selections:
Whichever writing prompt you choose to work with, we want you to tug at our heart strings so hard that we can't help but sob uncontrollably in the tub as we read your entries!

We'll share every submission with the entire community for them to enjoy, but we'll also be looking for the top three entries that excel in three criteria that we'll detail below.  This contest is open to all members of the Stonewall community, regardless of which games you play.  We're so very eager for you, SGN's amazing writing talents, to once again share your talent and creativity with us and your community!

To participate in Stonewall's "Sagas of Sorrow" writing contest, you must post your entry here, in this thread, before day's end on July 31st, 2022.  Please use the #WritingContest hashtag in your entries.  Your posted entry must comply with these additional rules to be eligible:

Only one entry per community member, please.  While we encourage you to include graphics to supplement your Sagas of Sorrow, only the written narrative portion of your entry will be judged.  Instructions on how to incorporate graphics in your post can be found by clicking here.

As always, we'll be looking for the THREE stand-out stories among all of the entries.  As we've done in the past, a panel of three judges will individually rate each of the entries in the categories of creativity, detail and impact.  The average of all three judge's rankings of an entry will produce the final score against which, the other entries will be ranked!

The winning contest entries will be recognized on our Facebook, Twitter and Instagram social media feeds.  We'll also be giving away a participation prize of 5 Stonewall Credits to all those who enter!  The prize packs are as follows:

Good luck to all participants!  We can't wait to read your entries!

4 people liked this
Edited 2 weeks ago by Voleron

4 days ago
For your #WritingContest reading, "Steep Declination" - All stardates use function two found here.

Acting Captain’s Log, Stardate 88463.13:  Acting Captain D’ani logging.
For my first command to be like this...  The Baker is shaken, and on my training cruise, as it would happen.  Little had been heard of the Borg in recent years, and most often only in Academy lectures.  Yet, here they stood, and here they fell.  Our captain and senior commissioned staff?  Abducted suddenly, assumed missing or – more likely – assimilated.  The Baker herself is still whole… if one can call it that.  All major systems save life support, artificial gravity, and auxiliary power are gone at this point.  With all breaches temporarily shielded at least, we’ve bought ourselves some time, but we’re on ration provisions and emergency supplies, likely until we hear something.  Not like we will, at least for the moment… long-range everything is still down, and life support is hanging on by a thread.  It’ll hang on by less of one as we keep losing the severely injured, which is a cold comfort to those remaining.  For now, our best hope is a survival focus, and that we’re eventually found by friendlies.  Until then, we’ve taken the Baker as dark as she’ll go.

Acting Captain’s Log, Stardate 88477.56:
Five days, and we’ve lost all of those who were critical.  We're down to one-quarter of the junior staff, and roughly two-thirds of my fellow cadets.  Those in junior staff have been asked to actively train the cadets in the ship’s continued maintenance and the crew’s continued treatment, as we’ve still not heard a thing.  Long-range sensors have just come back an hour ago, but we only get nebulous pings – nothing concrete.  Engineering’s working on getting subspace radio back, so we can at least send or receive something.  No word there, though hopefully soon…

Acting Captain’s Log, Stardate 88495.45:
Cadet Neleg from the Engineering track, as well as Lieutenant Azaki, have managed to get subspace radio back online – or so I was told at 0600.  We first received static, but then managed to get occasional chatter throughout.  No luck on cleaning the audio so far, so we’re opting to remain silent as a precaution.  We’ve managed to reinitialize three replicators, though they’re acting in a very reduced capacity and can barely sustain the crew as it remains.  Of the combined crew, about 62 remain, and 47 are on death’s door.  We need rescue sooner, rather than later, or there’ll be no one to rescue.  And in the case of detection by the Borg, the auto-destruct system has been confirmed operational, and the relevant codes have already been logged.  Given the relative equal chance that we'll lose someone who has such an authorization code to concur, this has been rigged to act on sole authorization if I am the one to initiate it.

Acting Captain’s Log, Stardate 88521.09:
Radio is back, and cleaner… and we all wish it wasn’t.  The run-in we had with the Borg was far from the only one, and the Beta Quadrant is overrun.  Sol system is holding on for the moment, but even they’re not optimistic about being able to hold out indefinitely.  At this point, rescue is far from likely, and our eventual discovery by Borg scouting forces becomes more and more likely if we choose to actively transmit.  We’re down to a skeleton crew of 46 – we were 49, but three crewmembers opted to pass on their own terms.  The rest of us aren’t faring much better, and the remaining supplies are thin.  Losing all but one replicator helps there, for sure…

Acting Captain’s Log, Stardate 88534.05:
Ensign Rohtt found something.  A micro-wormhole, unable to fit so much as a gel-pack and that we've not noticed yet, but leaking a signal… of a free quadrant.  And of all places, it’s right off our saucer by less than a kilometer.  No Borg signals, only Starfleet and standard civilian chatter.  Yet we think – no, we know – that it’s not our quadrant.  Long-range sensors picked up two spheres en route to our location, undoubtedly tempted by this find themselves, and due to arrive within minutes.  So, to get this out of the way, since we know this is likely the end, and as we’ve all agreed…

WARNING:  AUTO-DESTRUCT SUSPENDED AT 15 SECONDS.  THERE WILL BE NO FURTHER AUDIO WARNINGS.

It’s clear that our time has reached its end… but may the crew of the Baker – cadets and all – be remembered for their commitment to duty, in the midst of mounting adversity.  I am proud to have served with them, and to be their Captain, albeit briefly.  If you find this across the barrier of our universe, live for us.
Computer, package all logs from stardate 88463.13 onward, and transmit on specific vector one-two-seven mark forty-two.  Include active log in data stream.