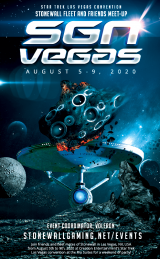 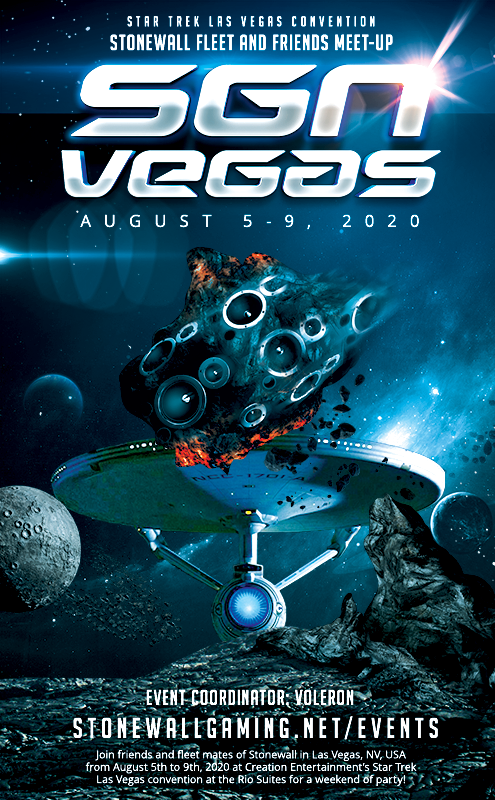 Join your Stonewall Gaming Network friends in Las Vegas from August 5 – 9, 2020, for our annual meet-up at the Star Trek convention & a week of community gatherings and events! All of the details are below!

Join your Stonewall Gaming Network friends in Las Vegas from August 5 – 9, 2020, for our annual meet-up at the Star Trek convention & a week of community gatherings and events! All of the details are below!

Stonewall's annual #VegasTrek meet-up started years ago, when several members of Stonewall Fleet met up at North America's largest Star Trek convention at the Rio Hotel and Suites in Las Vegas, U.S.A. As the years went on, meeting at the convention became somewhat of a tradition and with each passing year, more members made the journey to join the group. From humble beginnings, Stonewall's annual meet-up has grown, with past and present community members continuing to meet, in the finest spirit of Stonewall camaraderie and tradition.

As of the date of this post, there are at least 10 SGN members from around the world, planning on attending the 2020 meet-up, in addition to several former members and of course, we've all made many friends whom we've incorporated into our group and we'd love to introduce you to! The LGBTQ community is well represented at the Star Trek Las Vegas convention, and two annual parties are planned there each year, namely: "Gays in Space" and "Diversity Night", which we attend and are always graced with visits from supportive Star Trek celebs who come out to party with us!

So, you're thinking of possibly coming to join the Stonewall group in Vegas? We'd love to have you there! Here are some details of who you can expect to see there and what you can expect for the week or weekend.

Who all will be there?
As previously mentioned, we have numerous Stonewallers planning on attending this year's Stonewall meet-up, including members from the Netherlands, Canada and from across the United States. Past Stonewallers will also be an attendance from around the globe and as mentioned, our group has made a great many LGBTQ and ally friends there from around the world.

When is this and how long does it last?
The yearly Stonewall meet-up coincides with the annual Star Trek Las Vegas convention at the Rio Hotel and Suites. This year, the convention dates are August 5th to 9th, 2020. Some of us arrive early and make it a full week vacation, while others are content just to stop by for the weekend or a portion thereof. Maybe you want to stop by and meet the group one day but don't want to spend a full week or weekend with us or at the convention - that's no problem! You can tailor your trip however you see fit!

What if I'm not really a Star Trek fan?
That's okay! Since Stonewall Fleet is the guild that originally paved the way for the creation of the larger Stonewall Gaming Network as we now know it, the theme of the destination was naturally Star Trek, but plenty of our members, their spouses and/or our friends who tag along, aren't necessarily hard core fans. We plan some group events that don't specifically include being at the convention, so there's nothing stopping you from hanging out with us without committing to going to the convention. That said, many of us are Trek fans and with so much happening in the Trek universe right now, know that some of our events will include hanging out at the convention during daytime hours.

What kinds of things do you all do?
We're planning on structuring two days where we have a pre-planned schedule of events that may include one or more of the following:

You'll be free to attend any or all of the events we have planned and we'll be discussing other possible group activities here as we lead up to the big event in August!

Aside from the two structured days of events described above, the rest will be informal and casual. We've found that people enjoy having a few days of structured activities that they can opt in or out of, but that they also like to have their own time on some of the days to do their own thing or hang out by the pool and enjoy the Vegas heat. You can tailor your Stonewall meet-up experience to suit your own, personal vacation vision!

How will we all communicate?
Leading up to the event, we'll talk here on the event page! As the convention draws closer, we've created a private Vegas room on our SGN Discord server that we'll invite all attending Stonewall members to. It's where we'll communicate in real time throughout the vacation to see where everyone's at, announce our event and meet-up plans and just generally coordinate.

Can I bring my spouse or friend(s)?
Of course!

I want to come but do I have to stay at the Rio?
Nope! Many of us do, simply because that's the venue for the convention and the room rates are reasonable if you book in advance. There's also a discount code when booking the rooms for the convention that provide an additional discount. That said, if you're considering doing a vacation to Vegas and want to make a meet-up with us a side-event, you might consider staying at a more modern property and taking an Uber or taxi to meet up with us. Many members who've joined us over the years have elected to stay elsewhere, but if you buy things at the convention or want to take a quick nap between gatherings, there's no more convenient place to stay than the Rio.

Flights and Travel
This is obviously the responsibility of attendees to decide which airline and other travel accommodations would need to be booked.